Serge Patteta's galleries in the most beautiful hotels in Mauritius, he story of a passionate man

The five galleries Adamah Fine Arts founded by the arts lovers that is Serge Patetta shows the work of thirty-five international artists. And these painters and sculptors are not part of the smallest. Because if in the middle of the Indian Ocean the gallerist makes it possible to discover and admire exceptional works, their creators are for the least regulars of large European and American art galleries. It is simply the concept of Adamah Fine Arts, that of exposing international artists, something that has not been done and remained to be taken in Mauritius. After the warm welcome of its first gallery in Anahita during its opening five years and a half ago, Serge Patetta has transferred some pieces in the Constance Prince Mauritius, Four Seasons Resort, Maradiva Villas Resort and spa and the Sands Suites Resort and Spa where he opened other galleries.

Chagall, Miro, Picasso or even Soulages have all his admiration. The one whose primary motivation is to discover art and its beauties, exhibits more than three hundred works in its five galleries. They
are available for the appreciation of amateurs as well as the less informed but nevertheless curious to penetrate a world perceived perhaps as mysterious.

Emotion as a starting point
For the pleasure of Mauritians, expatriates and vacationers, the former gallery owner in Monaco has brought back to the Mauritian latitudes, works by artists for whom he has the exclusive representation throughout the Indian Ocean.
«I remember having bought my first work with my first salary in Saint-Paul de Vence, it was love at first sight, a drawing in gouache and India ink on Canson paper signed Manjapan, an artist now stored at the oblivion, which does not prevent me from still appreciating his drawing that I have kept”, introduces the gallery owner.
Because any association, any story generated with an artist begins with the emotion procured by one of his works, the grain, the touch that characterizes it. “Everything starts with emotion, placed above
bookish culture or a price. If the pieces chosen for the gallery are first of all because they give me emotion, two other points are nevertheless decisive for exhibiting at Adamah Fine Arts. It is about the appreciation that I will have on the quality of the work of a bronze, a canvas and the rating of the artist” he explains. Coming from a Nice family in the arts, Serge Patetta has since his childhood let his soul wander on opera tunes and in the padded atmosphere of the museums evoked assiduously. But the art will be desired a few years before it takes place at the very forefront of his professional life. Because he will first be the head of companies specializing in cosmetics and dietetic products in Monaco, before embracing the passion of his life by opening his first gallery, DML Fine Arts. In Mauritius today, Adamah Fine Arts can pride itself on being the only gallery to position itself on such a wide offer and to present the works of listed international artists.
The generously rounded bronzes of the Peruvian Mariela Garibay, the surprising winged sculptures of Jorge Marin, the canvases loaded with material by Mylène May, the powerful and tormented
sculptures of Jacques Van den Abeele are also exhibited in Paris, Hong Kong, Miami and Singapore. Sold here between 15 to 20% less than the market price, the works can be purchased free of charge by holidaymakers, as they are packaged by the gallery for shipment to the four parts of the world. 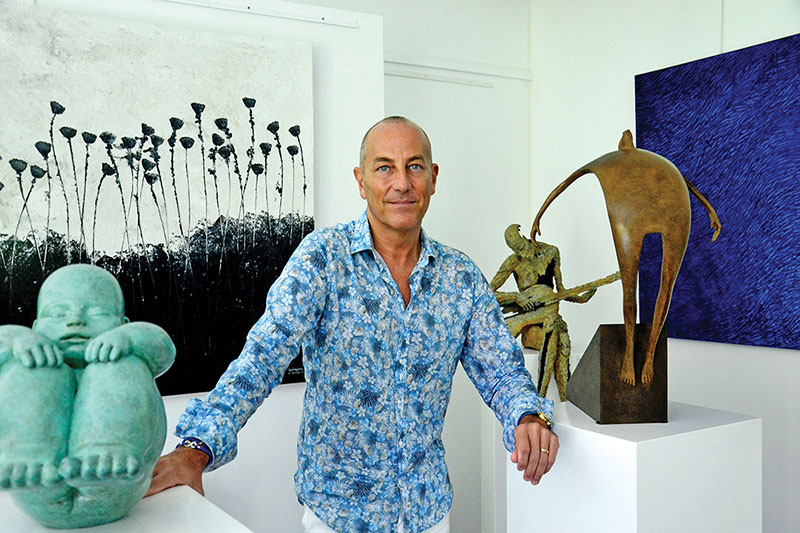